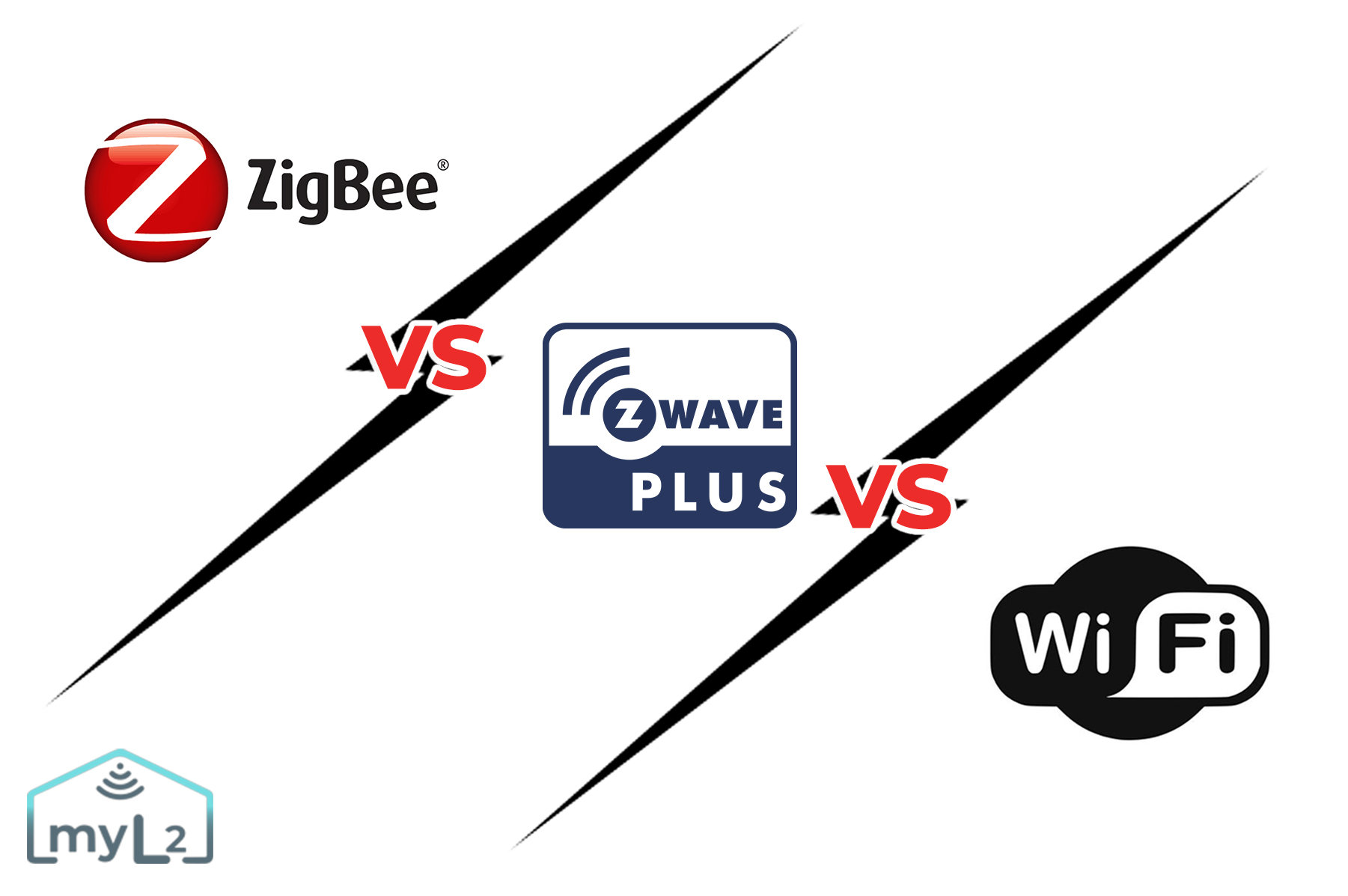 One of the things to watch out for when you start automating your home is what communication protocols to use.

Continuing the discussion in the article Where do we start making our home smart, in this tutorial we will investigate in detail each protocol and show you some clear advantages, but also disadvantages for each of the 3 most common protocols: ZigBee, Z-Wave and Wi-Fi.

Everything in a few words (the short version)

Let’s start with the technical details
The operating frequencies usually indicate the limitations and the maximum speed at which signals can travel.
For Z-Wave, the working frequency that is regulated for the CEPT (Central Europe) regions is 868.4 MHz or 869.85 MHz. This is important because devices designed for use in the US will not work with those designed for the EU. Check carefully before buying!

For ZigBee and Wi-Fi, the frequency used is 2.4 GHz, so the only possible compatibility issue is that host devices don’t ‘understand’ the messages sent by the remote devices.
In more detail, the 2.4GHz frequency can be divided into sub-channels, and the Bluetooth protocol (BLE – Bluetooth Low Energy) also works on the same frequency.
The following image describes the competition between Wi-Fi, BLE and Zigbee devices, where the colors represent: green – Wi-Fi channels, red – BLE broadcast channels (beacons or tokens).

According to this graph, if you want to optimize the operation of devices that allow you to adjust their transmission band, choose non-conflicting channels.
One possible problem that may prove to be difficult to solve is that of neighbors, especially if you live in an apartment block, if they configure their equipment on the same channels as those used in your smart home.
A simple rule is to use smaller channels for Wi-Fi (0-8), medium for Bluetooth (9-23) and high for ZigBee (Wi-Fi 33-36 / ZigBee 25-26); if you have a lot of unavoidable traffic on ZigBee channels 25-26, change the ZigBee gateway setting on channel 15 and move Wi-Fi traffic to 24-36 if your wireless router allows this.

Locally, the response time of all devices (regardless of protocol) is very small.
The only noticeable difference is the sleep (or low power consumption) mode, which is sometimes integrated into certain devices, which is why the first response after a longer pause is delayed by the need for the device to return to normal operating mode first.
A bigger problem with the response speed is that often a large part of the devices rely on cloud services to operate or execute complex scenarios.
In this case, the physical location of the cloud server is important, but does not constitute a severe limitation.
For example, assuming that the internet provider is one of good market reputation, the latency to the major peering networks in Europe is about 16ms, a value that you must double (outgoing + return) to calculate the maximum delay in executing a command. (ignoring the delay caused by the actual processing of the command, which is usually very small), resulting in an execution time in Europe of 32ms. The same calculation but for a cloud server hosted in Asia, the delay is 160ms, and for the USA it’s 300ms.
As 300ms (0.3 seconds) the delay is hardly noticeable and can only be observed when the local network is overloaded (by Netflix / Youtube 4K streaming, intensive gaming, etc.) or if the monitored devices are cameras or motion sensors.

We’ll discuss separately about ZigBee and Z-Wave on one side, and Wi-Fi on the other.
For ZigBee and Z-Wave, the devices form a MESH network without the need for extra configuration efforts.
Be warned, not all devices are repeaters in the MESH network, only those permanently connected to electricity (those which are NOT powered by batteries).
To get the best coverage, take advantage of the fact that ZigBee bulbs act as repeaters, just like Z-Wave plugs. You will have an excellent response time all over the house.
Regarding the limitations of each protocol, a Z-Wave network is limited to 232 devices, while the ZigBee network limit is at 65,000; also, for the MESH network, the Z-Wave devices will auto-configure to upto 4 hops counting away from the gateway (so maximum 4 repeaters), this limit not existing in ZigBee-type networks.
Note, however, if you have two ZigBee networks (ex: Samsung SmartThings and Philips Hue), the bulbs in the Hue network will NOT extend the signal of devices in the SmartThings network!

On the Wi-Fi side, choose a good router! This is even more important if you have either a large number of devices or large bandwidth consumers (cameras, streaming solutions, etc.).
If the signal does not reach where it’s needed, consider either purchasing a Wi-Fi router pack that supports MESH configuration, or at least one repeater. Beware, Wi-Fi repeaters can cause inconveniences when switching devices from one parent (router) to another.
Always separate the Wi-Fi network used for smart home devices from the one for other devices or the one for guests, this is very important to increase the level of security.

Batteries that power wireless devices have very different lifespans.
For ZigBee, you can expect a water leaks detector to work for up to 24 months on the same CR2032 battery, a button that turns on the lights in rarely accessed rooms – 18 months, the same button but in the living or bedroom – 12 months, a door / window sensor on average 12-16 months, depending on how often it’s pushed, while a motion and illuminance sensor in an area where there is a lot of movement might need to have it’s CR2450 battery changed even as often every 6 months. The CR123A battery of the Honeywell smoke detector lasts up to 24 months, but it is recommended to change it every 12 months regardless of whether it’s drained or not, for optimal detector operation. The sensors communicate very little when they have nothing useful to transmit and only send battery voltage updates and a few connectivity indicators, the actual consumption being caused by the transmission of useful information such as movement, opening, pressing, etc.

For Z-Wave, the battery life is 20-30% shorter, but devices usually come equipped with larger capacity batteries.

Use batteries from reputable manufacturers, the highest quality being Panasonic, Sony or Maxell, and avoid no-name products.

For Wi-Fi we do not have enough information because Wi-Fi devices that work exclusively on batteries are rarely encountered and they are often coupled with a solar charger; the Wi-Fi protocol is recognized as a larger consumer due to its complexity.

The biggest risks you have to take into account if the security of your smart home is affected are the following:

If you choose to install and configure the smart home yourself, pay special attention to the security aspect!

Sometimes devices that meet a specific purpose are not available with the desired technology and two technologies must be combined.
The solution here is either to use a hub that supports several or all three technologies, such as Samsung SmartThings, to use a cloud-based service such as IFTTT or to adapt a solution through custom communication protocols, such as MQTT, installed on a mini-PC or a Raspberry PI.
In terms of stability, we recommend using dedicated hardware as much as possible to reduce the number of devices that need to be maintained.
If this is not possible and you do not have the technical skills required to install and configure the MQTT protocol, the solution is IFTTT.
Of course, if you have the time no worries about complexity, a local Raspberry PI can be the most efficient solution in terms of response speed and configurability.

If you find this information useful, join the myL2 Tutorials facebook group and we’ll keep you updated with new guides every week.

You’re also invited to the Offers and Discounts facebook group, you will be the first to know about our promotions and offers!